NASA’s recently launched Solar Dynamics Observatory, or SDO, is returning early images that confirm an unprecedented new capability for scientists to better understand our sun’s dynamic processes. These solar activities affect everything on Earth.
Some of the images from the spacecraft show never-before-seen detail of material streaming outward and away from sunspots. Others show extreme close-ups of activity on the sun’s surface. The spacecraft also has made the first high-resolution measurements of solar flares in a broad range of extreme ultraviolet wavelengths.
“These initial images show a dynamic sun that I had never seen in more than 40 years of solar research,” said Richard Fisher, director of the Heliophysics Division at NASA Headquarters in Washington. “SDO will change our understanding of the sun and its processes, which affect our lives and society. This mission will have a huge impact on science, similar to the impact of the Hubble Space Telescope on modern astrophysics.” 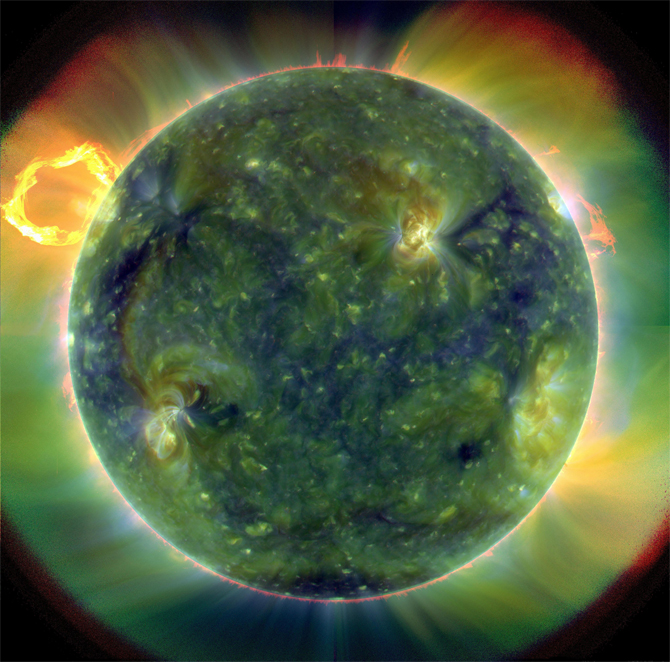 Launched on Feb. 11, 2010, SDO will provide images with clarity 10 times better than high-definition television. SDO will send 1.5 terabytes of data back to Earth each day, which is equivalent to a daily download of half a million songs onto an MP3 player.
The SDO “is shedding new light on our closest star, the sun, discovering new information about powerful solar flares that affect us here on Earth by damaging communication satellites and temporarily knocking out power grids. Better data means more accurate solar storm warnings.”
More information from NASA