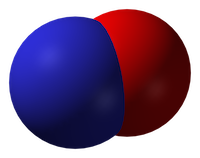 The use of inhaled nitric oxide is established in certain groups of patients: it improves oxygenation (but not survival) in patients with acute respiratory distress syndrome(1), and it is used in neonatology for management of persistent pulmonary hypertension of the newborn(2). But it can be applied in other resuscitation settings: in arrested or peri-arrest patients with pulmonary hypertension.

Read this (modified) description of a case managed by one of my resuscitationist friends from an overseas location:

A young lady suffered a placental abruption requiring emergency hysterectomy. She arrested twice in the operating room after suspected amniotic fluid embolism. She had fixed dilated pupils.
She developed extreme pulmonary hypertension with suprasystemic pulmonary artery pressures, and she went down the pulmonary HT spiral as I stood there. On ultrasound her distended RV was making her LV totally collapse. She arrested. Futile CPR was started.
I have never had an extreme pulmonary HT survive an arrest. I grabbed a bag and rapidly set up a manual inhaled Nitric Oxide system and bagged and begged…
She achieved ROSC after some minutes. A repeat ultrasound showed a well functioning LV and less dilated RV.
Today, after 12 hours she is opening her eyes and obeying commands. Still a long way to go, but alive.

It sounds impressive. I don’t have more case details, and don’t know how confident they could be about the diagnosis of amniotic fluid embolism but the presentation certainly fits with acute pulmonary hypertension with RV failure. The use of inhaled nitric oxide has certainly been described for similar scenarios before(3). But it raises bigger questions: is this something we should all be capable of? Are there cardiac arrests involving or caused by pulmonary hypertension that will not respond to resuscitation without nitric oxide?

The haemodynamic consequences of RV failure are reduced pulmonary blood flow and inadequate left ventricular filling, leading to decreased cardiac output, shock, and arrest. In severe acute pulmonary hypertension the RV distends, resulting in a shift of the interventricular septum which compresses the LV and further inhibits LV filling (the concept of ventricular interdependence).

What’s wrong with standard ACLS?
In some patients with PHT who arrest, CPR may be ineffective due to a failure to achieve adequate pulmonary blood flow and ventricular filling. In one study of patients with known chronic PHT who arrested in the ICU, survival rates even for ventricular fibrillation were extremely poor and when measured end tidal carbon dioxide levels were very low. In the same study it was noted that some of the survivors had received an intravenous bolus administration of iloprost, a prostacyclin analogue (and pulmonary vasodilator) during CPR(6).

CPR may therefore be ineffective. Intubation and positive pressure ventilation may also be associated with haemodynamic deterioration in PHT patients(7), and intravenous epinephrine (adrenaline) has variable effects on the pulmonary circulation which could be deleterious(8).

If inhaled nitric oxide (iNO) can improve pulmonary blood flow and reduce right ventricular afterload, it could theoretically be of value in cases of shock or arrest with RV failure, especially in cases of pulmonary hypertension; these are patients who otherwise have poor outcomes and may not benefit from CPR.

Is the use of iNO described in shock or arrest?
Numerous case reports and series demonstrate recovery from shock or arrest following nitric oxide use in various situations of decompensated right ventricular failure from pulmonary hypertension secondary to pulmonary fibrotic disease(9), pneumonectomy surgery(10), and pulmonary embolism(11) including post-embolectomy(12).

A recent systematic review of inhaled nitric oxide in acute pulmonary embolism documented improvements in oxygenation and hemodynamic variables, “often within minutes of administration of iNO”. The authors state that these case reports underscore the need for randomised controlled trials to establish the safety and efficacy of iNO in the treatment of massive acute PE(14).

Why aren’t they telling us to use it?
If iNO may be helpful in certain cardiac arrest patients, why isn’t ILCOR recommending it? Actually it is mentioned – in the context of paediatric life support. The European Resuscitation Council states:

ERC Guideline: (Paediatric) Pulmonary hypertension
There is an increased risk of cardiac arrest in children with pulmonary hypertension.
Follow routine resuscitation protocols in these patients with emphasis on high FiO2 and alkalosis/hyperventilation because this may be as effective as inhaled nitric oxide in reducing pulmonary vascular resistance.
Resuscitation is most likely to be successful in patients with a reversible cause who are treated with intravenous epoprostenol or inhaled nitric oxide.
If routine medications that reduce pulmonary artery pressure have been stopped, they should be restarted and the use of aerosolised epoprostenol or inhaled nitric oxide considered.
Right ventricular support devices may improve survival

Should we use it?
So if acute (or acute on chronic) pulmonary hypertension can be suspected or demonstrated based on history, examination, and echo findings, and the patient is in extremis, it might be anticipated that standard ACLS approaches are likely to be futile (as they often are if the underlying cause is not addressed). One might consider attempts to induce pulmonary vasodilation to improve pulmonary blood flow and LV filling, improving oxygenation, and reducing RV afterload as means of reversing acute cor pulmonale.

What’s the take home message?
The take home message for me is that acute pulmonary hypertension provides yet another example of a condition that requires the resuscitationist to think beyond basic ACLS algorithms and aggressively pursue and manage the underlying cause(s) of shock or arrest. Inhaled pulmonary vasodilators may or may not be available but, as always, whatever resources and drugs are used, they need to be planned for well in advance. What’s your plan?

4 thoughts on “Inhaled nitric oxide: a tool for all resuscitationists?”