After neonatal intubation, the incidence of malposition of the tip of the tracheal tube is fairly high.
A technique was evaluated involving palpation of the tube tip in the suprasternal notch, which in this small study was superior to insertion length based on a weight-based nomogram.
The suprasternal notch was chosen because it anatomically corresponds to vertebral level T2, close to the optimal position at the mid-tracheal point. Correct position on the chest radiograph was defined as any position <0.5 cm above the interclavicular midpoint and more than 1 cm above the carina.
During tracheal tube placement, the tip was gently palpated in the suprasternal notch with the index or little finger of the left hand while holding the body of the tube with the fingers of the right hand. The tube tip was adjusted until the bevelled edge was just palpable in the the suprasternal notch.
Digital palpation of endotracheal tube tip as a method of confirming endotracheal tube position in neonates: an open-label, three-armed randomized controlled trial.
Paediatr Anaesth. 2013 Oct;23(10):934-9
[EXPAND Abstract]


OBJECTIVE: To compare the malposition rates of endotracheal tubes (ETTs) when the insertional length (IL) is determined by a weight-based nomogram versus when IL is determined by palpation of the ETT tip.

PRIMARY OUTCOME: Rate of malposition of ETT as judged on chest X-ray (CXR).

My colleagues and I describe a tragic case in this month’s European Journal of Emergency Medicine1. Our physican-paramedic team was called to the home of a collapsed 38-week pregnant female who was in asystolic cardiac arrest. A peri-mortem caesarean delivery was performed by the physician in the patient’s home and the delivered newborn required intubation and chest compressions for bradycardia before resuming good colour and heart rate. Sadly there was ultimately a fatal outcome for both patients, but this case reminds us of the indications for this intervention and for emergency and pre-hospital physicians to be prepared to do it. A literature search yielded only one other reported prehospital case in recent medical literature2.

Okay – rather than ‘therapeutic hypothermia’, the recommended phrase now is ‘targeted temperature management’. Several critical care authorities got together to produce clinical recommendations on this topic. Here are a few interesting points from the document:
On coagulation:
Hypothermia affects platelet function and prolongs the prothrombin time and partial thromboplastin time. These effects are masked when laboratory analysis is performed at 37°C, suggesting that any risk will be mitigated by rewarming.
Although not mentioned in the abstract, the authors examined the role of TTM in raised intracranial pressure (ICP):
Sufficient evidence exists to conclude that TTM does decrease ICP compared to unstructured temperature management. However, there is no sufficient evidence to make a recommendation regarding the use of targeted hypothermia to control elevated ICP to improve patent-important outcomes in TBI. The jury makes NO RECOMMENDATION regarding the use of TTM as an ICP control strategy to improve outcomes in brain injuries regardless of cause (trauma, hemorrhage, or ischemic stroke).
Regarding acute liver failure with severe cerebral edema:
there are currently no RCTs. There is a case series suggesting a strongly favorable effect. This is a powerful argument for support of an RCT evaluating TTM alone or in combination with hepatic dialysis strategies

OBJECTIVE: Representatives of five international critical care societies convened topic specialists and a nonexpert jury to review, assess, and report on studies of targeted temperature management and to provide clinical recommendations.
DATA SOURCES: Questions were allocated to experts who reviewed their areas, made formal presentations, and responded to questions. Jurors also performed independent searches. Sources used for consensus derived exclusively from peer-reviewed reports of human and animal studies.
STUDY SELECTION: Question-specific studies were selected from literature searches; jurors independently determined the relevance of each study included in the synthesis.
CONCLUSIONS AND RECOMMENDATIONS:

Colorimetric CO2 detectors may fail to indicate successful tracheal tube placement in adults in certain circumstances, such as low cardiac output states, and waveform capnography is considered the gold standard. We now have data that demonstrate their inadequacy for neonatal intubation. Ideally, waveform devices should be used by all professionals who intubate patients – from paramedics to neonatologists.

AIM: Clinical assessment and end-tidal CO(2) (ETCO(2)) detectors are routinely used to verify endotracheal tube (ETT) placement. However, ETCO(2) detectors may mislead clinicians by failing to identify correct placement under a variety of conditions. A flow sensor measures gas flow in and out of an ETT. We reviewed video recordings of neonatal resuscitations to compare a colorimetric CO(2) detector (Pedi-Cap®) with flow sensor recordings for assessing ETT placement.
METHODS: We reviewed recordings of infants <32 weeks gestation born between February 2007 and January 2010. Airway pressures and gas flow were recorded with a respiratory function monitor. Video recording were used (i) to identify infants who were intubated in the delivery room and (ii) to observe colour change of the ETCO(2) detector. Flow sensor recordings were used to confirm whether the tube was in the trachea or not. RESULTS: Of the 210 infants recorded, 44 infants were intubated in the delivery room. Data from 77 intubation attempts were analysed. In 35 intubations of 20 infants both a PediCap® and flow sensor were available for analysis. In 21 (60%) intubations, both methods correctly identified successful ETT placement and in 3 (9%) both indicated the ETT was not in the trachea. In the remaining 11 (31%) intubations the PediCap® failed to change colour despite the flow wave indicating correct ETT placement.
CONCLUSION: Colorimetric CO(2) detectors may mislead clinicians intubating very preterm infants in the delivery room. They may fail to change colour in spite of correct tube placement in up to one third of the cases.

On the basis of the published data to date the Neonatal Task Force of the International Liaison Committee on Resuscitation (ILCOR) made the following recommendation on February 2010 with regard to therapeutic hypothermia: 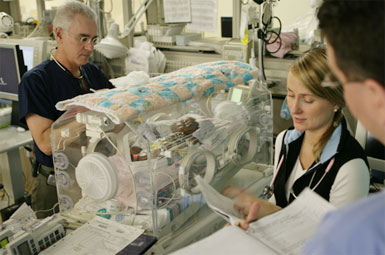 Maybe they’re not just little adults after all: the normal reference ranges for oxygen saturation in the first few minutes of life have been defined for healthy newborns:
OBJECTIVE The goal was to define reference ranges for pulse oxygen saturation (SpO2) values in the first 10 minutes after birth for infants who received no medical intervention in the delivery room.
METHODS Infants were eligible if a member of the research team was available to record SpO2 immediately after birth. Infants were excluded if they received supplemental oxygen or any type of assisted ventilation. SpO2 was measured with a sensor applied to the right hand or wrist as soon as possible after birth; data were collected every 2 seconds.

More evidence that cooling the hypoxic neonatal brain improves outcomes….
OBJECTIVE Mild hypothermia after perinatal hypoxic-ischemic encephalopathy (HIE) reduces neurologic sequelae without significant adverse effects, but studies are needed to determine the most-efficacious methods.
METHODS In the neo.nEURO.network trial, term neonates with clinical and electrophysiological evidence of HIE were assigned randomly to either a control group, with a rectal temperature of 37°C (range: 36.5–37.5°C), or a hypothermia group, cooled and maintained at a rectal temperature of 33.5°C (range: 33–34°C) with a cooling blanket for 72 hours, followed by slow rewarming. All infants received morphine (0.1 mg/kg) every 4 hours or an equivalent dose of fentanyl. Neurodevelopmental outcomes were assessed at the age of 18 to 21 months. The primary outcome was death or severe disability.
RESULTS A total of 129 newborn infants were enrolled, and 111 infants were evaluated at 18 to 21 months (53 in the hypothermia group and 58 in the normothermia group). The rates of death or severe disability were 51% in the hypothermia group and 83% in the normothermia group (P = .001; odds ratio: 0.21 [95% confidence interval [CI]: 0.09–0.54]; number needed to treat: 4 [95% CI: 3–9]). Hypothermia also had a statistically significant protective effect in the group with severe HIE (n = 77; P = .005; odds ratio: 0.17 [95% CI: 0.05–0.57]). Rates of adverse events during the intervention were similar in the 2 groups except for fewer clinical seizures in the hypothermia group.
CONCLUSION Systemic hypothermia in the neo.nEURO.network trial showed a strong neuroprotective effect and was effective in the severe HIE group.
Systemic Hypothermia After Neonatal Encephalopathy: Outcomes of neo.nEURO.network RCT
Pediatrics. 2010 Oct;126(4):e771-8
Update Dec 2014:
An RCT to determine if longer duration cooling (120 hours), deeper cooling (32.0°C), or both are superior to cooling at 33.5°C for 72 hours in neonates who are full-term with moderate or severe hypoxic ischemic encephalopathy.
Longer cooling, deeper cooling, or both compared with hypothermia at 33.5°C for 72 hours did not reduce NICU death. Small study.
Effect of depth and duration of cooling on deaths in the NICU among neonates with hypoxic ischemic encephalopathy: a randomized clinical trial
JAMA. 2014 Dec 24;312(24):2629-39

Seventy doctors and nurses from neonatal units administered positive pressure ventilation to a term newborn manikin using a Neopuff T-piece device. Recordings were made (1) before training, (2) after training in mask handling and (3) 3 weeks later. Leak and obstruction were calculated.
Median (IQR) leak was 71% (32–95%) before training, 10% (5–37%) directly after training and 15% (4–33%) 3 weeks later (p<0.001). When leak was minimal, gas flow obstruction was observed before, directly after training and 3 weeks later in 46%, 42% and 37% of inflations, respectively.
The training provided included the following demonstrated mask technique:

In this technique the mask is squeezed onto the face, between the downward thrust of the fingers and upward pull of the chin lift.
Leak and obstruction with mask ventilation during simulated neonatal resuscitation
Arch Dis Child Fetal Neonatal Ed 2010;95:F398-F402
Even with the right technique, adequacy of ventilation can be hard to assess. Principles to bear in mind are:

In an observational study of actual newborn resuscitations in Melbourne, researchers measured inflating pressures and VT delivered using a respiratory function monitor, and calculated face mask leak. After 60 seconds of PPV, resuscitators were asked to estimate VT and face mask leak. These estimates were compared with measurements taken during the previous 30 s.
In 20 infants, the median (IQR) expired tidal volume (VTe) delivered was 8.7 ml/kg (5.3–11.3). VTe and mask leak varied widely during each resuscitation and between resuscitators, who were also poor at estimating VT and mask leak.
Assessment of tidal volume and gas leak during mask ventilation of preterm infants in the delivery room.
Arch Dis Child Fetal Neonatal Ed. 2010 Nov;95(6):F393-7

Therapeutic hypothermia (TH) has been associated with improved outcomes in term infants who present with moderate hypoxic-ischaemic encephalopathy (HIE). However, in the three major studies the time to initiate cooling was at approximately 4.5 postnatal hours. Many newborns are referred to specialist centres where cooling takes place from outlying hospitals (‘outborn’). It may be the case that earlier initiation of TH could improve outcomes, leading Takenouchi and colleagues to propose a ‘Chain of Brain Preservation’.
‘Given that most infants are outborn, a time sensitive education metaphor termed Chain of Brain Preservation may facilitate early recognition of high risk infants and thus earlier treatment.‘

Chain of Brain Preservation—A concept to facilitate early identification and initiation of hypothermia to infants at high risk for brain injury
Resuscitation. 2010 Dec;81(12):1637-41